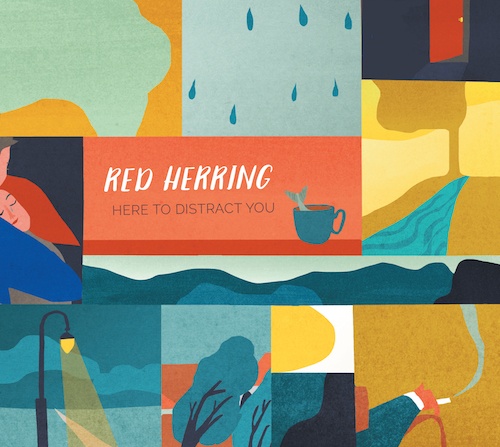 NO DOUBT ABOUT IT

If you didn't check the liner notes, your ears might well tell you that the five musicians in 4Wheel Drive grew up in Johnson City of Bristol or Mt. Airy, spending a fair amount of their formative years playing all night at bluegrass festivals or watching various 1st generation bluegrass musicians perform live at the Old Dominion Barn dance. And they may have (the liner notes are silent on personal history), but the odds are against it, since the band appears to be located in the Netherlands. The total lack of any accent may initially mislead you as to the band's geographical center, but not nearly as much as their practically flawless, traditional delivery.

We tend to think that real bluegrass soul decreases in proportion to distance from our coastline, even though the music is increasingly well-traveled. This band is probably the best example you could find to the contrary. They start with an excellent lead/tenor singer and bass player in Theo Lissenberg. Paul van Vlodrop plays solid Scruggs-style banjo and adds the baritone part. Peter Broekhuysen plays guitar, mandolinist Hendrik Ahrend sings occasional lead, and Joost van Es sings lead and is superb on the fiddle. With the exception of possibly van Es, the instrumental work is not spectacular (just extremely good), but the band has absolutely figured out what it means to play instrumentally as a band and compliment each other and the vocals. Add to this line the fine lead singing of Lissenberg and truly excellent harmonies by the rest of the vocalists, and you have a traditional bluegrass band that is the equal of some of the very best found on the west side of the pond.

Songs include several fresh-sounding standards, such as "I'm Lonesome without you", "Wreck Of The Old 97", "I'm Lost And I'll Never Find The Way", some newer material, including "How Many Men" and "Bad Moon Rising", and some nicely done instrumentals, with "Indian Killed A Woodcock" and Tim Smith's "Anita's Waltz" among the highlights. Liz Meyer's "Occasional Blues" is a slow waltz, that really shows the band at it's best; a great song, excellent lead and harmony vocals, and flawless instrumental support.
As Laurie Lewis said in her liner notes, "(4Wheel Drive) leaves no doubt about it, if a blight were to wipe out bluegrass throughout its native country, it would live on, alive and well, firmly rooted across the Atlantic." Amen.

There have been some very fine bluegrass groups sending music our way across the Atlantic and judging by the quality of 'No Doubt About It', 4Wheel Drive should be ranked as one of the best new proponents of the traditional sound anywhere the music is played. Highly recommended.